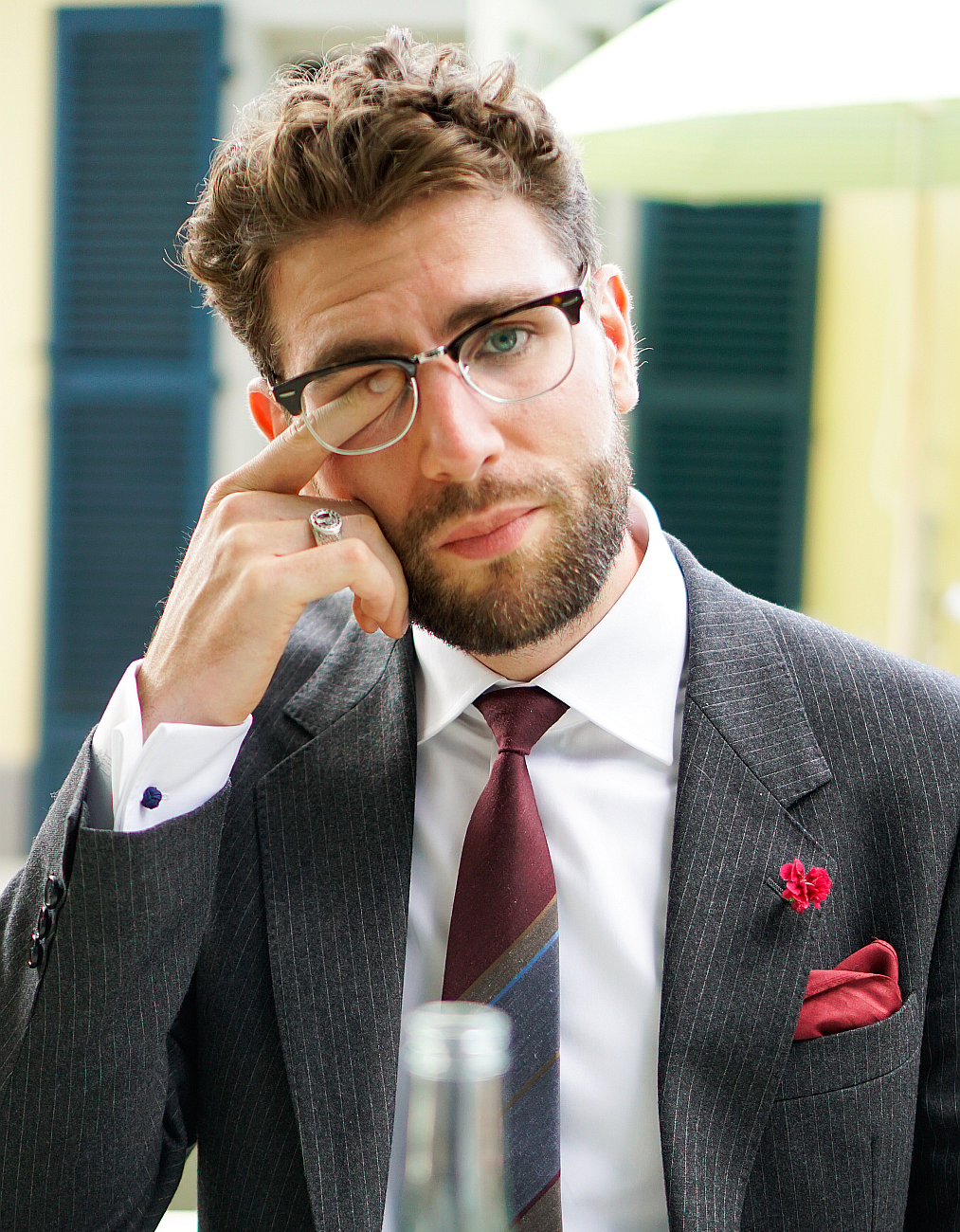 2019 – for alto flute, double bass, keyboard, percussion & electronics – 10' – P: 20.12.2019 →video →page from score
The title means deviation. Each instrument respectively intonates tones within a given microtonal range around a framework of tones with shared fixed intonation. Basis are different measurements of arabic tonal systems. At this the keyboard modulates the other instruments' input in various ways.
The piece was premiered by Ensemble Musikfabrik at Conservatory in Cologne.

2019 – for flute, viola & trombone – 15' →page from score
The musicians do not only play their instruments but also one bytebeat-algorithm respectively, the settings of which they control by means of specific pitches and to the sonic output of which they again react. The sounds are converged in their degree of granulation, without imitating each other, and pass through passages of time of varying nature.

2018/19 – for viola – 8' – P: 08.02.2019 →video →page from score
Based on a poem by Frederico García Lorca this piece is characterized by an ambiguity of shapes. In contrasting pa­ral­lelism different elements are for­ming an unstable simultaneity and every­thing drifts through a fragile, enig­matic uni­verse.

2017/18 – for accordion – 8' – P: 31.01.2018 →video →page from score
Sound-study that deals with the phe­no­menon noise. In the background an ima­ginary machine is at work, the fic­tive processes of which are solely per­cep­tive through their acoustic by-pro­ducts. Not onomatopoeia but the aes­the­tic ap­preciation of unintended ac­com­panying sounds is the focus of this piece.

2014/2018 – for violin or viola, alto saxophon & piano – 8-12' – P: 23.02.2018 →video →page from score
Penumbra is acoustical "semi-shade", a diffuse sonic event, where shapes of sound become blurred. Sounds meld with the result that their sources get undistinguishable. This happens in a way that they are brought together up to indistinguishability or overlapped complementary so that they cannot be told apart anymore.

2017 – electronic object →video
Object created from an old radio, of which buttons and knobs were picked up and connected to a microprocessor. On this processor there is a bytebeat-algorithm programmed, which controls shifts in voltage and converts them into audio signals using pulse width modulation. By means of the buttons and knobs the algorithm can be manipulated; the knobs define numerical values within the algorithm, the buttons control the operator, which connects its two halves.

2016 – for cello – 7' – P: 27.07.2018 →page from score
Virtuoso solo piece which plays with the contrast between strong increase and decrease of density of events. After consisting of a crowded abundance of va­rious sounds, of which the isolated perception is difficult, the changes in sound are limited to a minimum so that one has to refocus to evaluate the relevance of each change. In the centre of the piece there is a point from which all events are reflected exactly in reverse.

2016 – for no solist & small ensemble – 8' – P: 08.05.2016 →page from score →publisher
This piece is about how a solo part effects and affects its accompaniment. The ensemble supports, imitates, contrasts or grows out of the hypothetical solo part, which – without ever actually having existed – works within the entire piece. First the accompaniment merges completely with it, then emancipates itself and subordinates itself again, but at strife in itself.

2016 – electronic compositon – 4'30''-9' – P: 26.07.2018 →video
Irregular, continuous impulses form the constant element in this piece, upon which four instances of sound join together and separate again within a struc­ture determined by chance. Each one of the instances of sound itself too is subjected to processes of chance for some aspects, which makes their current shape of sound unpredictable.

2016 – for contrabassoon and live-electronics – 13' →screenshot
Dialogue between contrabassoon and live-electronics, in which both act as emancipated, autonomous partners. Their sounds are brought closer to the sounds of the other respectively and they influence each other constantly du­ring the course of the piece. Simultaneously each one varies the theme in his own way, with the result that the variations interlace.

2015 – for electric guitar – 15' – P: 24.10.2018 →video →page from score
Virtuoso instrument-study, that sounds out the possibilities of the instrument in an expressive way. The basis for this is provided by a modulation on traditional Arabic scales, during which the piece plays freely with hints at the oud, the Ara­bic lute, and at rock music, in particular by Jimi Hendrix.

2014/2018 – for string quartet – 6' →page from score
Rhythm is the only fixed information in this score, indications of pitch are only relative and after all subsidiary, because the piece is orientated to noise rather than defined tone. All numeric values base on prime numbers: rhythmical values, the number of bars, of phrases, of sections, of pages, even the tempo indication. Only exception is the instrumentation.

"And now for something completely different"

2014 – for piano – 10' →page from score
This is a piece of deconstructivist character, which prevents any feeling of con­sistence and connection. It sounds out different playing techniques for the piano and queries them immediately. By means of its flexible and incoherent structure it juxtaposes various styles and techniques in opposition and evokes an im­pression of instability.

Does it communicate anything? Must it?

2014 – for flexible setting – flexible duration – P: 23.05.2014 →video →page from score →publisher
These questions by John Cage are to be asked for every music anew. Music is communication and therefor organically alive. It lives within the moment and this always-being-different is made absolute in this piece. It provides enormous freedom for the player(s), by which he/they should encounter the composer in communication at eye level.

2014 – for clarinet, piano & drums – 7' – P: 22.02.2014 →video →page from score →publisher
Study on the roles of different instrumental functions within an ensemble. Melo­dy-, harmony- and rhythm-instrument play the melody-, harmony- and rhythm-part consecutively, all of which feed on elements from the blues. Only in the last movement every instrument fulfills the role, which it is assigned to traditionally.

2013/2014 – chamber opera – 50' – P: 07.07.2014 →trailer →website
Multidisciplinary opera-project, where each one of the protagonists is confron­ted with his own dire fate. The language is unintelligible, because it is formed by the singers and speakers every time anew. In this way access is lifted from the level of "understanding" onto the level of "experiencing", which is also suppor­ted by the music.

2013 – for 2 flutes – 6-9' – P: 25.04.2013 →video →page from score →publisher
The title derives from the word (to) morph and is an onomatopoeia for the ex­pression of grunting or sighing. The idea behind this piece is the transition bet­ween noise and sound on the one hand and different sound sources on the other. The boundaries of sounds should blur as much as possible and the current sound source at each time should be disguised.

2013 – for soprano & flute – 6-9' – P: 25.04.2013 →video →page from score →publisher
The title derives from the word (to) morph and is an onomatopoeia for the ex­pression of grunting or sighing. The idea behind this piece is the transition bet­ween noise and sound. It is a portrait, built from quotations from interviews. The dramaturgy within this piece is embodied by the players by shifting between in­teraction and merger into one character.

2013 – for orchestra – 9' – P: 30.05.2013 →video →page from score →publisher
Montage-piece, which uses as source of material three orchestral pieces, which were never performed. Its charm lies in particular in the very heterogeneous connection of fragments of very diverse stylistics. The variety is a result of the distance of time between the three original pieces and the connection within this piece gives its sound a whole new quality.

2012 – for ensemble – 4' – P: 06.07.2012 →video →page from score →publisher
Like a sleepwalker, who performs remembered actions, which lose their pur­pose by taking them out of their usual context and thereby become independent in a new way, this piece uses small cells as material. It wanders through these cells lead by a number symbolism, which derives from the name Somnambul, and in this way new connections emerge.

2012 – for toy piano – 5' – P: 24.04.2012 →video →page from score →publisher
This is an homage to John Cage, on occasion of his 20th day of death and his 100th day of birth. But only in the choice of the instrument; the piece is com­pletely independent in its construction and language. The five short movements follow a selection of rhythmical patterns and melodic material, both derived from traditional Arabic music.

2012 – for ensemble – 4' →video →page from score →publisher
B A Bb E (German: H A B E) are the four notes, which – also in this order – form the exclusive material of this piece therefor its possession (German: Habe = possession). First the material is taken as collective and used in larger groups, which are then broken up to smaller parts. This creates an interaction of individual and collective within the ensemble.

3 songs on poems by Helena Kaschel

2011 – for soprano & piano – 7' – P: 28.05.2013 →video →page from score →publisher
The three songs are joined like a triptych. Their separate topics on being, loss and void form a consistent story in this context. A spirit experiences itself, loses itself and finally dissolves into endless void. Merciless eternity swallows every­thing up – makes everything equal. "Who would want immortality?"

2011 – for ensemble – 4' →video →page from score →publisher
This Dance of Death is an individual involvement with the idea of nearness of Death. Elements of threat or chaos in the music, however, are not perceived as intimidating, but comprehended as relieving and propulsive. Dance of Death is also a kind of experiment: only dancing with Death one feels how near of far it actually is.

2011 – for marimba – 2' →video →page from score →publisher
Putting elements together like tiles is characteristic for this piece. It has a cer­tain tonal source material however its development is almost playful. The spare indication of expression and the instruction con molto espressione should en­courage every interpret to "play" the piece his own way.

2011 – for 2 pianos – 7' – P: 21.11.2013 →video →page from score →publisher
Ravage élégant (elegant devastation) is both an homage hidden in a play of words and basic principle: a formal and expressive model is alienated from its original meaning, by small neat alterations in the sound material. The result is a completely independent work. Devastation, in this case, is of fertile nature.

2011 – for ensemble – 2' →video →page from score →publisher →review
Art is an end in itself. This piece declares this credo with sarcasm, the only way to avoid a paradox in this case. Therefore this piece adopts in its first part a fan­fare-type tone that is influenced by the bitonality of Darius Milhaud and it strikes in its second part a sweet note that is inspired by Jazz and early Hollywood-sounds.

2010 – for 2 percussionists – 4' – P: 23.03.2011 →video →page from score →publisher
This piece is solely based on a relation between impulse and sound, without instruments of definite pitch. Many rhythmical elements, used in this piece, de­rive from patterns of traditional Arabic music. Complementary and shifting struc­tures evolve on the basis of the continuous but aperiodic run of the bass drums.

2010 – for piano – 2' – P: 12.04.2011 →page from score →publisher
The great noontide is the moment of overcoming man and the appearance of the Übermensch in Nietzsche's Zarathustra. This event needs calm, subtle and unemotional music. Inspired by Scriabin's preludes this piece wants to say: "This is my morning, my day beginneth: arise now, arise, thou great noontide!"

Impressum
Responsible for content and layout of this homepage:

Disclaimer: The author and editor of this homepage is not responsible for the content of other sites, which are hyperlinked from this site and affiliated sites. We disassociate ourselves explicitly from the contents of other sites according to the decission of the Land court Hamburg (reference number.: 312 O 85/98, pronounced may 12th 1998).

"[Regulations of the german copyright law apply in its respective version. All copyrights of the protected works included in this website remain reserved. Any furher use of the works, beyond listening to the presented musical works, must, without explicit permission by the GEMA, not take place.]"